Japan is rich in legends and folk tales, some of which are linked to actual places. Here are a few of the more famous that are definitely worth a visit!

Tono - The Legends of Tono 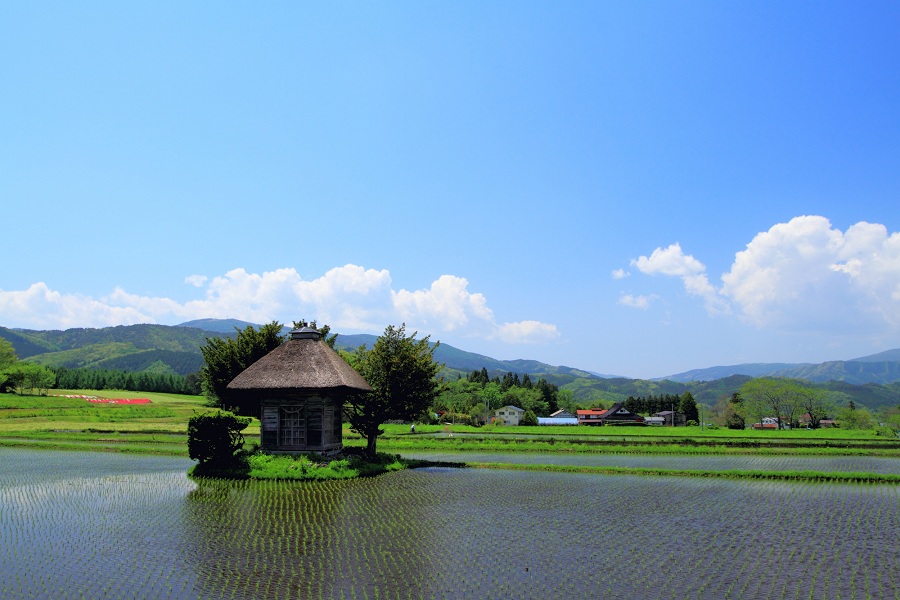 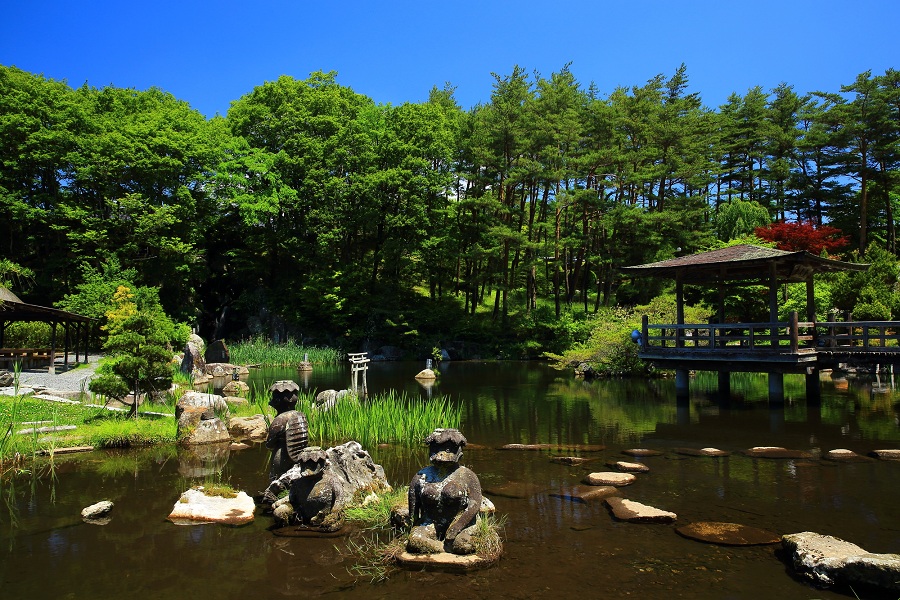 The kappa is one of Japan's most distinctive mythical creatures, with legends concerning kappa found throughout the country--however, it is perhaps thanks to the pastoral town of Tono in Iwate Prefecture that kappa-related lore became popular nationwide. Kunio Yanagita, one of Japan's most prominent folklorists, collected the oral traditions of Tono and released them as Tales of Tono in 1912. Besides kappa, stories recounting all sorts of spooky phenomena can be read in the anthology, which has since given Tono the reputation as being Japan's "City of Folklore".

Thankfully, Tono's scenery retains much of the enigmatic allure found in its eponymous storybook. One of the more famous places is a temple-side creek that was reputedly inhabited by a mischievous kappa, a water imp with a fondness for both cucumbers and flesh. The source of a kappa's power is said to be the water filling the bowl-like depression at the top of its head. However, should you ever chance upon a kappa, simply bow to it. The ever-polite imp will return your bow and it will lose its strength as the water falls out its head-bowl. 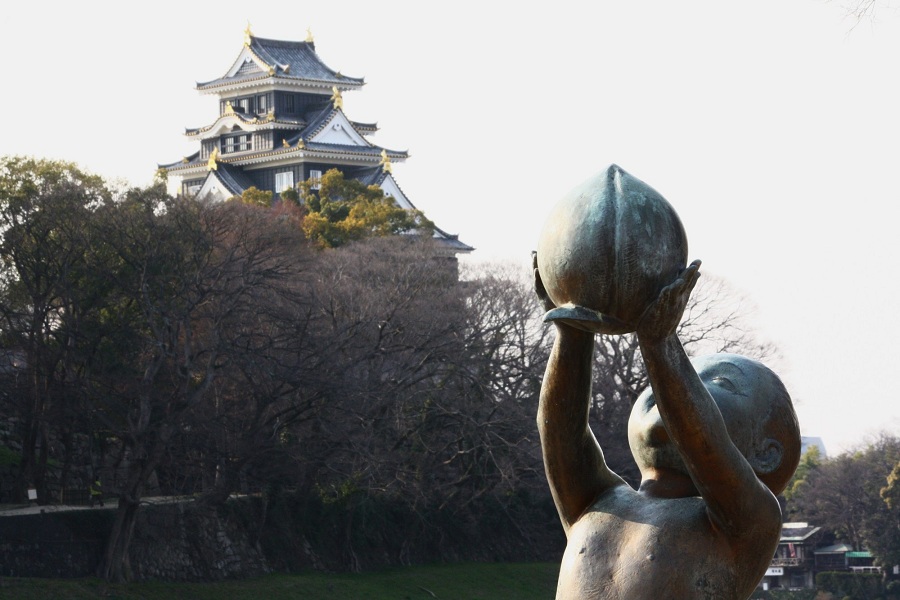 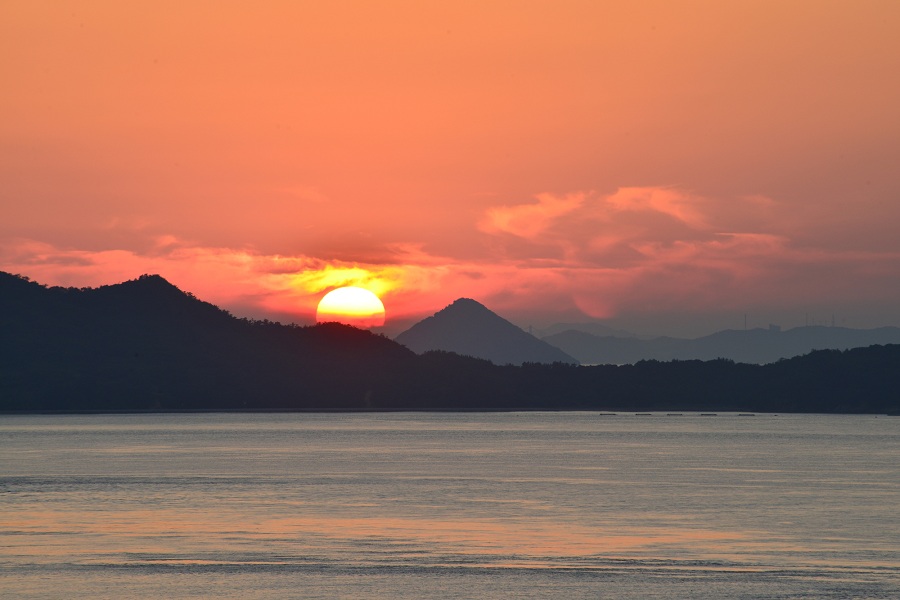 Although the original setting for one of Japan's most beloved folk tales, Momotaro, is disputed, it is often associated with Okayama Prefecture, where so-called "Peach Boy" is regarded as a hometown hero and references to the legend abound. The ogre island where the decisive battle took place is alleged to be Megijima Island in nearby Kagawa Prefecture, where the many caves make a perfect hiding place for Momotaro-fearing ogres.

The story goes that an old couple who wished for a child found a giant peach floating down the river. Amazingly enough, a young boy sprang from the peach and the couple promptly adopted him as their son, naming him Momotaro. One day, the boy left home to fight some ogres that had been terrorizing the land, gaining allies in a dog, a monkey, and a pheasant in the process. At last, he battled the ogres at their island fortress and won, after which, the victorious child went triumphly home to the old couple and presumably lived happily ever after.

Takachiho - Amaterasu and the Cave 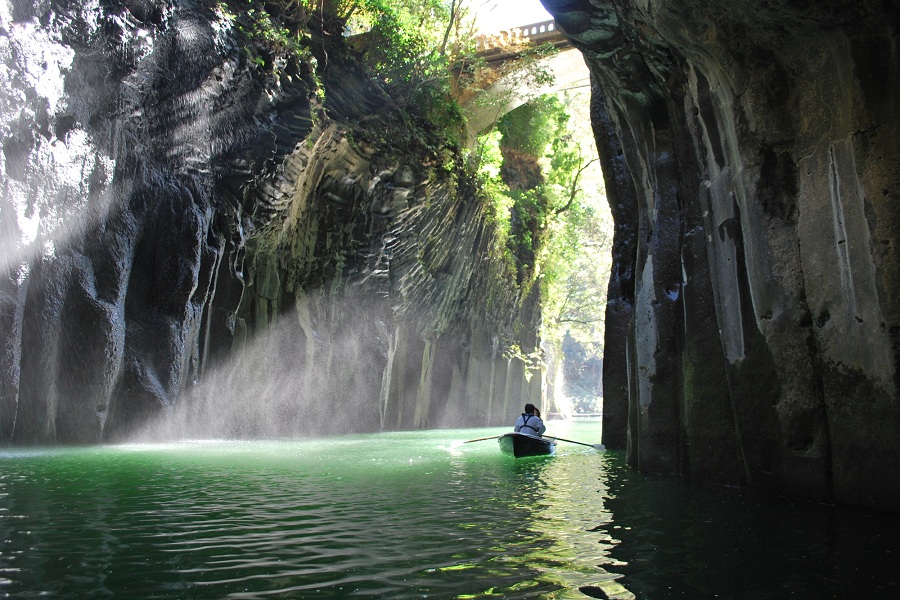 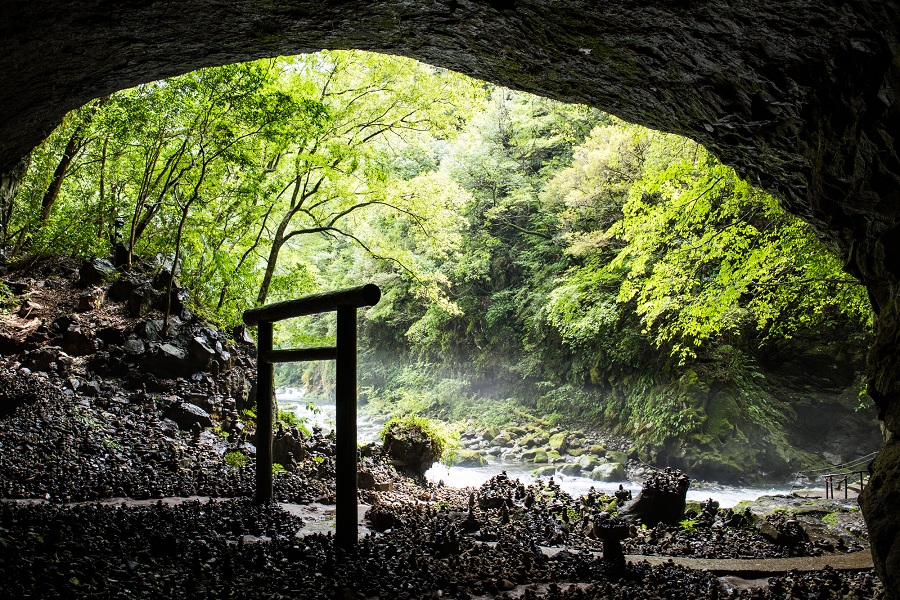 According to the legends of the Japanese native religion, Shinto, the sun goddess Amaterasu hid herself in a cave in grief after her wild brother, the storm god Susanoo, went on a rampage. Japan was thus deprived of sunlight until the other gods conspired to lure her out of the cave with some merry and provocative dancing.

Takachiho is the location of the legendary cave from where the sun goddess emerged and it is not difficult to see how this area, with its gorge, river, waterfalls and virgin forests could be the setting of some of Japan's most prominent founding myths. Every evening at Takachiho Shrine, a reenactment of the myth in the form of a dance called "yokagura" is performed for visitors. The cave itself may not be entered as it is sacred, but visitors may see the cave from an observation point by inquiring the staff at Amanoiwato Shrine. 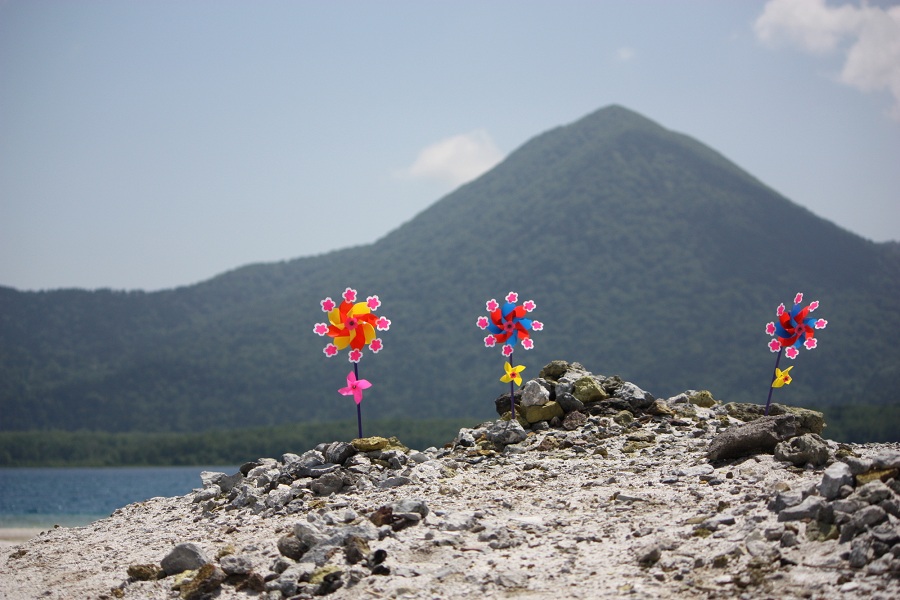 In Japanese Buddhist lore dating back several centuries, the souls of prematurely departed children are sent to a sort of purgatory at Sai no Kawara, a riverbed of the underworld located at the entrance to Hell. In an attempt to build enough merit to move on, the children are tasked with building little pagoda-like towers of pebbles--only to have horrible ogres chase them away and destroy their efforts. However, Jizo, a bodhisattva and guardian of children, comes to their rescue--watching over the poor children as they try again.

There are actually a few places in Japan which claim to be the site of this tale--in other words, the site of an entrance to Hell. Mt. Osore, meaning Fear Mountain, really paints this picture--its also one of the three most sacred mountains in Japan. The low volcanic activity in the area gives the mountain a stark landscape and steam vents and bubbling pools are scattered throughout. The mountain is also a pilgrimage site for parents grieving for their lost children, leaving brightly-colored pinwheels and building little towers of stones in their prayers to Jizo.

Miho Pine Grove - The Legend of the Hagoromo 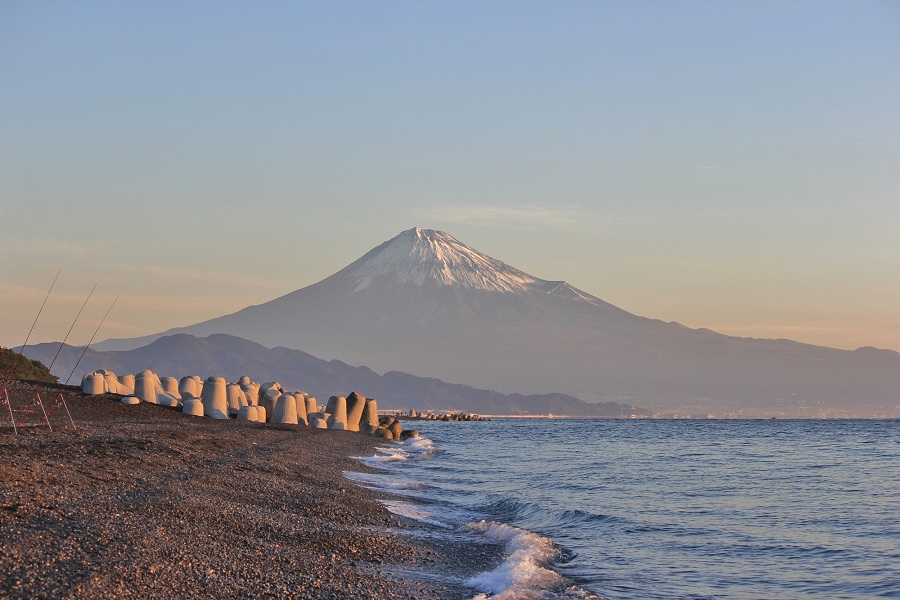 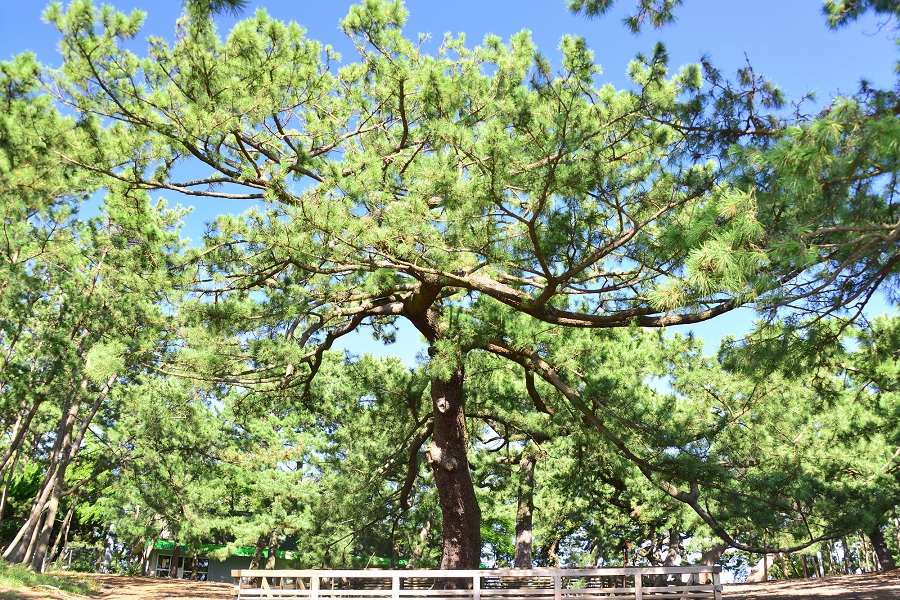 The Legend of the Hagoromo tells the tale of a fisherman who comes upon a beautiful hagoromo (robe of feathers) while out fishing one day. Upon taking it, a celestial maiden appears and demands its immediate return, otherwise she will not be able to return to heaven. The man obliges her to dance the dance of heaven; she dons her feathered mantle and dances so elegantly that the fisherman remains mesmerized as she floats away to her heavenly home.

As with many Japanese folk tales, there are several places in Japan that claim their scenery as the setting for the Legend of the Hagoromo. Arguably the most famous of these places is the Miho Pine Grove in Shizuoka Prefecture, where a stretch of black pine trees create a sharp contrast against the sea, framing a wonderfully picturesque view of Mt. Fuji. It's not hard to imagine a celestial maiden ascending to the sky from such a setting, which has inspired poets and artists for centuries upon centuries. The site includes an old pine tree reputed to be the very same on which the maiden hung her robe as well as a shrine where it said a remnant of the robe is kept. Every October, a noh play based on the tale is performed here at night by the light of the fire.